What are the different sorts of ear infection? 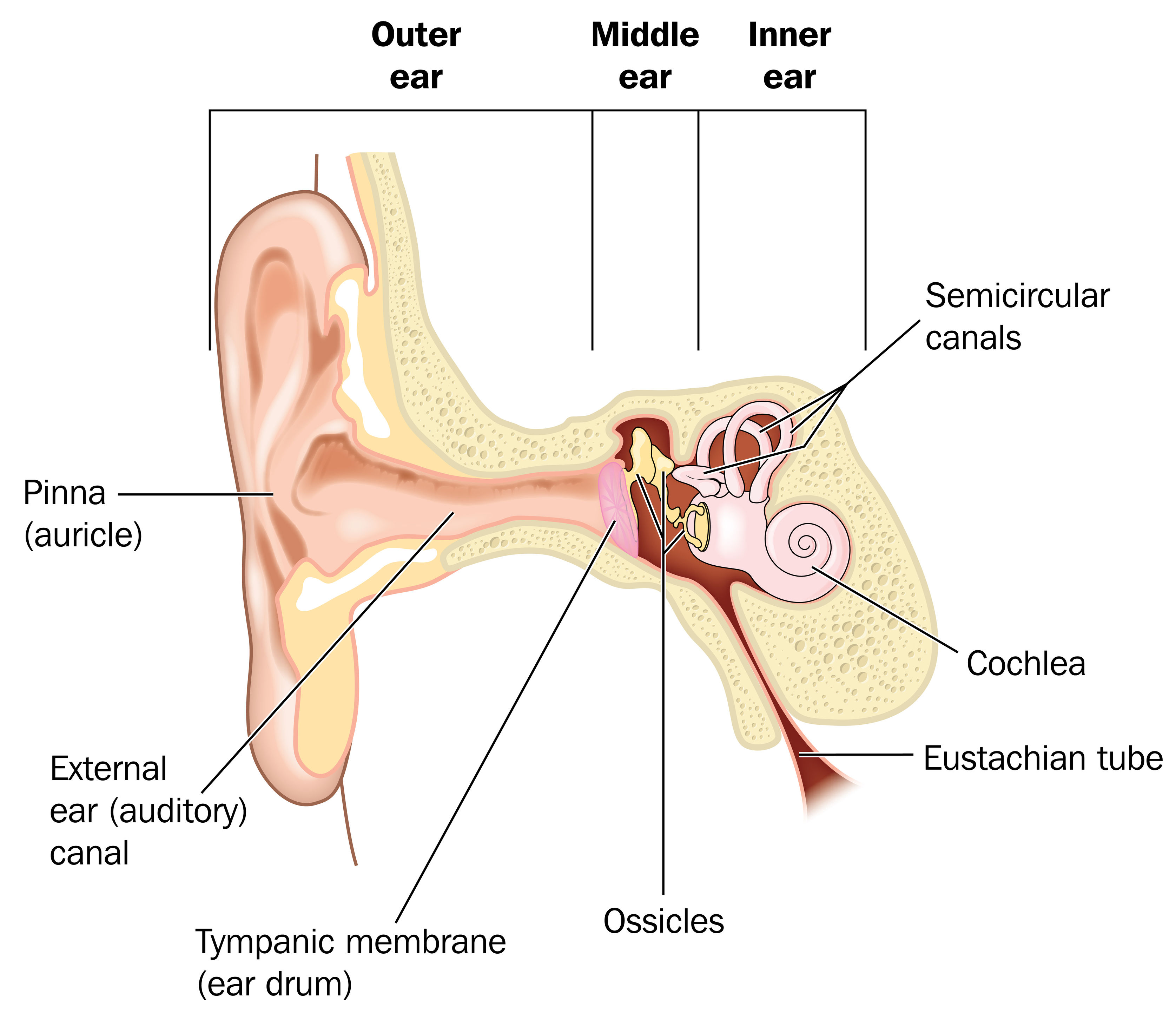 Ear anatomy – featuring the external ear, the middle ear and the inner ear.

What is an outer ear infection? 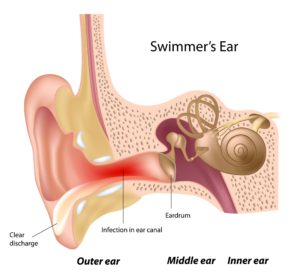 The skin of the ear canal and ear wax, usually serve as a good barrier against infection. However, sometimes when the ear canal becomes waterlogged such as after swimming, bacteria and fungi can cause a localised skin infection. This results in pain and sometimes an offensive discharge from the ear. Tugging on the ear can be painful.

The treatment for outer ear infections is to apply antibiotic and/or antifungal/ steroid ear drops. Often your doctor will clean any wax and debris from your canal to help clear the infection and allow the drops to penetrate better. It’s very important to keep the ear dry until the infection has resolved. The choice of ear drop is important as some can be toxic if used incorrectly. Sometimes a swab will be taken to guide treatment.

Prevention is really the best treatment. This means drying your ears after swimming or bathing, particularly if they feel waterlogged. The easiest way to do this is to use a product such as “Aqua-ear” (or similar) every time after you swim. It is possible to make your own version at home with 50 per cent vinegar and 50 per cent methylated spirits but the commercial product will smell better.

If you use a cotton-bud to dry your ear be very careful not to over insert it. They say “never put anything smaller than your elbow into your ear”. Inserting objects into your ear canal for drying or cleaning often results in wax being pushed deeper into the canal or against your eardrum, which is extremely unpleasant. It is also possible to directly rupture the eardrum.

On a side note, if you suffer with wax blocking your ear canal there is a simple solution that can help. Wax is produced in the outer third of the ear canal by specialised cells. It functions to lubricate, clean and protect the ear canal from infection. The ear is designed to be self-cleaning. Wax gradually works its way out of the canal in a ‘conveyor belt’ fashion collecting debris, old skin cells and hair as it goes. Some people are genetically prone to hard wax which often makes them prone to the canal becoming blocked up. If this applies to you, try regularly applying some wax softening drops (eg “Waxsol” or “Ear Clear”) or vegetable oil once per week (I suggest keeping the ear drops with your fingernail trimmers as a reminder). Keeping the wax soft helps it come out naturally. Sometimes, if your ear canal becomes blocked and uncomfortable, your GP can gently syringe the wax out with warm water. Applying the ear softening drops regularly for a few days prior to your appointment can make this process easier. In difficult cases a referral to an ENT surgeon to suction the wax out under direct vision with a microscope can be arranged.

In order to explain middle ear infections you need to know a little about Eustachian tube dysfunction and glue ear.

The middle ear is a closed cavity behind the eardrum. It is ventilated by a narrow tube called the ‘Eustachian tube’, which opens at the back of the nose. It is particularly narrow in some adults and in most children. Sometimes this tube becomes occluded, often during an episode of hay fever or a common cold. This means the pressure in the middle ear cavity cannot equalise, resulting in the sensation of a blocked ear. You may hear the sound of your voice in your head when you speak, the affected ear can crack and pop and you may even experience short bouts of pain. Similar symptoms are sometimes experienced when descending in a plane. We call this phenomenon “Eustachian tube dysfunction”. It tends to get better by itself but can take several weeks. Some advocate trying daily non-sedating antihistamines, a nasal steroid spray (eg “Nasonex” or “Rhinocort”) or regularly performing the “valsalva manoeuvre” (holding your nose while blowing out against closed lips to make your ears ‘pop’) to try to speed up the process but the evidence for this is limited.

What is Glue Ear?

Glue ear occurs when the middle ear cavity becomes filled with a thick mucous-like fluid. It tends to occur with Eustachian tube dysfunction, particularly in kids with recurrent colds. Most of the time it resolves spontaneously after several weeks or months.

Dr Simon Nasser advises that glue ear can impair hearing. If it occurs at an age critical for language development (18months – 6 years) and is persistent, referral to an ENT surgeon for consideration of grommets may be considered.

Grommets are small tubes that are placed through the eardrum under general anaesthetic. They remain in place for a period of time allowing the thick fluid in the middle ear cavity a means of escape so that normal hearing can be restored.

What is a Middle Ear Infection? 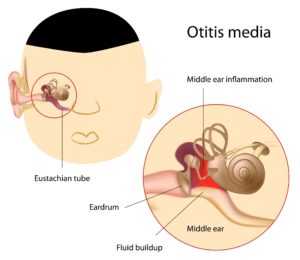 Middle ear infections affect the middle cavity (behind the eardrum).

It’s best to seek advice from your GP when you suffer ear pain.